The bushfire crisis and a little kangaroo named Clover​​

I woke to the smell of smoke in Perth on December 11th. I rose quickly, went to the window and looked beyond the bay to the bush land of the hills. The sky was dark with a plume of smoke drifting from the north. I immediately thought of the animals.

I didn’t know it then, but I was about to meet Clover, a beautiful young kangaroo who would crystallize the reason we are urging Nike and adidas to stop using kangaroo skin in some of their soccer shoes. 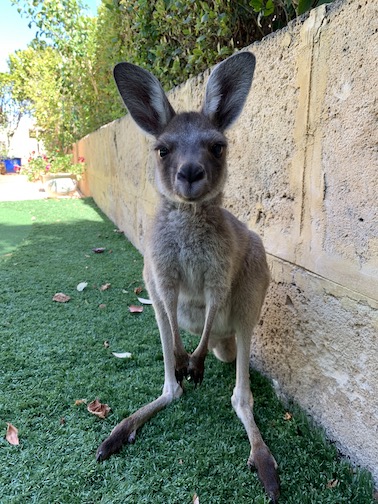 Summer had just begun, and with it, the bushfire season. I’d been living here for 20 years and still the fires were not something I’d become accustomed to. But this season was different.

The government’s Bureau of Meteorology announced it was the hottest and driest year on record with rainfall 40% below average. Drought conditions had squeezed out so much moisture from the landscape in recent years, that when the sun and heat came (with temperatures over 110 degrees Fahrenheit), the rainless lightning strikes set trees aflame. Fires joined and raged with such fury that their force stirred tornadoes — inescapable for even the fastest of animals.

The fire, 40 miles north of my home in Perth, was burning Yanchep National Forest, a parkland adjacent to the Indian Ocean and home to kangaroos, cockatoos, echidnas, and my favorite reptile, the blue-tongued lizard. I feared for their safety. I also worried about the koalas who lived in a fenced off human-made viewing area.

As Yanchep burned, so too did forests and bush in every state in Australia. News footage showed snippets of horror — koalas, sheep, cattle, kangaroos, and people being burned alive. Firefighters reported that the screams from burning koalas would haunt them forever.

Two months after some of the biggest fires started, officials announced they’d finally been “contained,” meaning that some were still burning but were under control. The government provided a sobering statistic: an estimated 30 percent of the country’s wildlife habitat had been destroyed. A scientist estimated that more than a billion animals had perished.

Three weeks after the Yanchep blaze was contained, rescuers entered the fire zone. On January 16th, I joined four women from the West Australian charity, Wildlife Care, and entered the charred remains of Yanchep National Forest. Our goal was to search for injured wildlife and replenish feeding stations for those who may have survived.

An old trailer carried sacks of muesli, a water tank, hose, and a gas-powered motor — to move the water to blue plastic “kiddie” swimming pools that served as water sources. As there was no way to safely access the interior, we traveled on dirt fire roads.

The feeding stations provided good news. Tail markings leading up to the pools provided proof of survivors. The kangaroos had found the water. Nearby, we located kangaroo droppings and examined them. They had muesli in them. This lifted our spirits, but only temporarily. As we continued to replenish the food, we walked past the charred bones of the kangaroos and lizards overtaken by the flames. And then there were the bodies of kangaroos who had survived the fires but were dying from starvation and myopathy — a stress-related condition, often induced by long-distance running, that destroys muscle tissues and often ends in death. 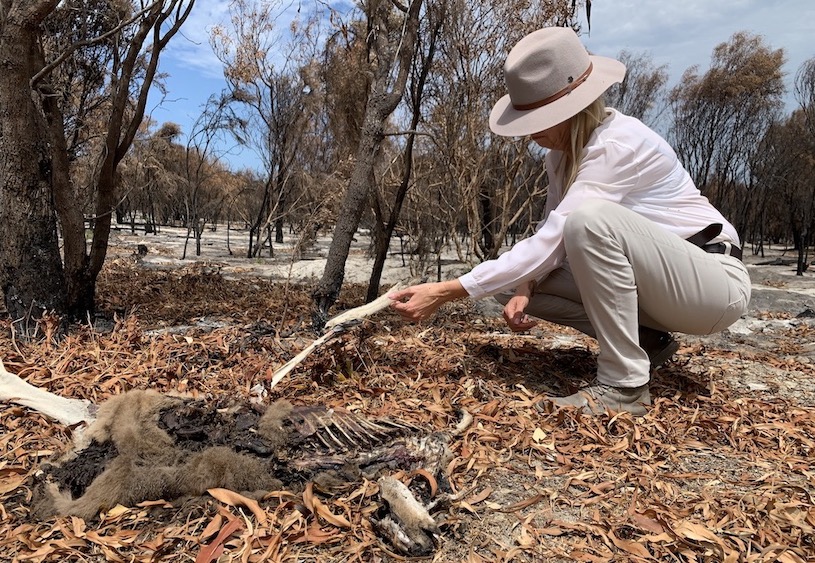 A week after witnessing the aftermath of the fires, I had the privilege of meeting some of the rescued joeys at the home of one of the volunteers. Two of the joeys seemed content, being carried around in cloth pouches. Another joey, a tiny female named Clover, was fearful and aloof. It was explained by her caregiver that she was suffering from a form of post-traumatic stress from her ordeal.

And then she told me her story.

Clover had first been noticed by a photographer capturing images of the fires. He’d witnessed Clover attempting to get into the pouches of females who weren’t her mother. The kangaroos responded by hitting her and later, the whole mob ganged up and cast her away. The photographer alerted park rangers who said they’d keep an eye on her. But it wasn’t until a few days later that Wildlife Care was called to pick her up. It was nearly too late.

I saw the glaring absurdity of rescuing kangaroos like little Clover only to potentially release her back into the wild to face the risk of hunters shooting her that so her skin can be used to make certain kinds of soccer shoes.
We must stop this.

For days she had been eating only charred sand, and she was suffering from burned feet. Wildlife caregiver Lyn Manuel hooked up an IV in the field to give her life-giving fluids before rushing Clover to a veterinarian. The little kangaroo was in shock caused by the compounding traumas of the fires, being burned, running for her life, the unknown noises of sirens and water-dropping planes, being orphaned, being rejected and bullied by other kangaroos, and then being handled by humans who were putting needles in her. Much of the time she looked into space. And that had her caregivers worried. Government regulations require that wildlife that cannot be successfully rehabilitated to the point that they can survive independently in the wild, must be euthanized. Clover’s fate was uncertain. 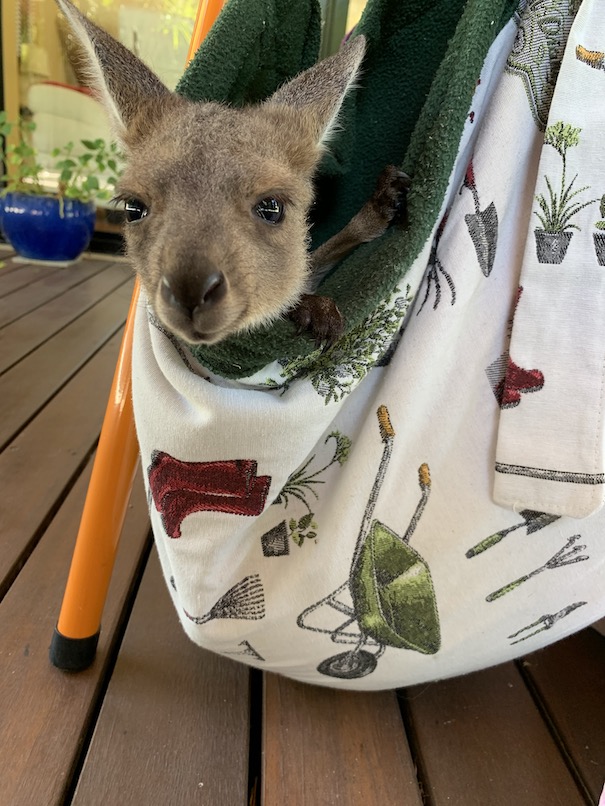 A week after meeting Clover, when I was visiting a joey nursery where a dozen kangaroos were growing up together for eventual release as their own mob, I received the thrilling news that Clover had taken a dramatic turn for the better. She was responding to treatment and would soon join the others at the nursery.

The news caused me to reflect on the conflicting views of Australians toward kangaroos. Considered “pests” by farmers and “commodities” by the government, professional hunters kill over two million kangaroos a year in the largest commercial hunt of terrestrial animals in the world. On the other end of that spectrum are the compassionate people who consider kangaroos anything but pests and go to endless lengths to nurture one orphaned joey so she can be released to live a full life in her natural habitat.

What I witnessed over two months in Australia was beyond horrific. And what makes it worse is that protections aren’t in place to prevent or even slow the recurrence of such disasters. While politicians debate climate change and our role in it, I feel we must act for the much-loved species who are suffering. To do that, we need to understand the roles we, as individuals, play in participating in the demise of a species. What we eat and wear should reflect our value system. Kangaroos aren’t skins and meat; they are sentient, sensitive individuals. I truly hope the droughts and fires plaguing Australia serve as a real-time reminder of why we must work together to protect the wild lands in every country in order to preserve life for all.

Joeys rescued from the bushfires.