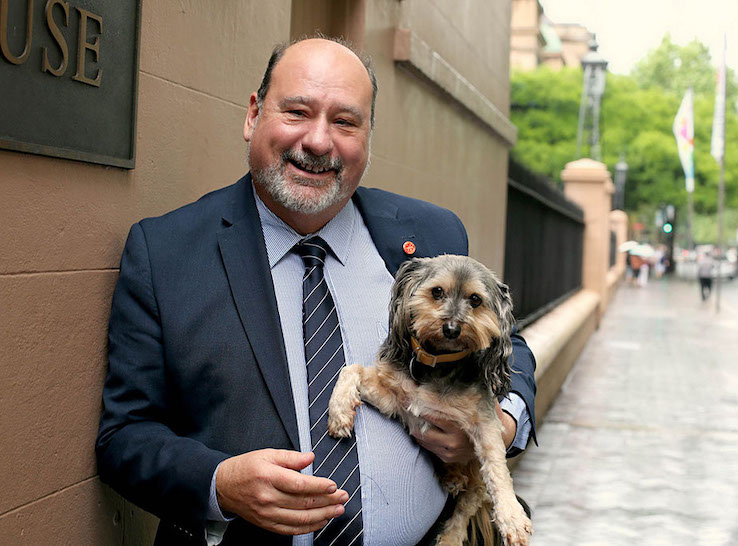 No one can speak with more authority than Australian Member of Parliament Mark Pearson when it comes to kangaroos being killed to make Nike’s soccer shoes. As a lifelong animal advocate who was elected to the Legislative Council of the New South Wales Parliament (like our State Senate) in 2015, Mark must now deal face-to-face with the government he has long opposed for allowing the kangaroo carnage to continue.

Mark became the first Australian Member of Parliament elected on an Animal Justice platform. Over the past five years Mark has introduced bills to protect farm animals, ban the use of exotic animals in circuses and phase out mulesing of sheep. (Mulesing, the removal of strips of skin around the buttocks, is considered the most invasive husbandry practice performed on animals without anesthesia.) Mark established and chairs the Committee on Animal Cruelty Laws in New South Wales, working to expand laws and toughen enforcement.

But kangaroos are Mark’s main passion and the first image to greet you on his website. He has held hearings grilling department officials and has exposed government surveys with inflated numbers of kangaroos meant to justify “harvesting” quotas in the millions (with “harvesting” being the government’s preferred term for large-scale slaying). And he’s working to stop government agencies from classifying kangaroos as “pests,” terminology that excuses cruel treatment and is hardly fitting for magnificent creatures who have flourished on the continent for millions of years.

Mark worked with other advocates to persuade several European grocery chains to remove kangaroo meat from their shelves. He’s won an agreement with Russia to ban kangaroo meat imports. Mark even traveled to China with an Indigenous elder to derail the Australian government’s effort to open that huge, new market for kangaroo products. Most recently, during the fires, you could find Mark in the field with “wildlife carers,” rescuing kangaroos and helping start IVs (his nursing background coming in handy). 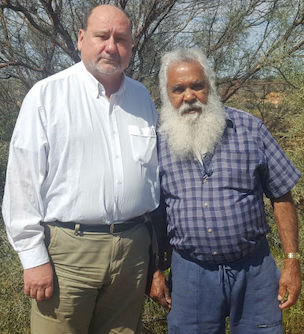 In addition to its two predominant political parties, Labour and Liberal, Australia has dozens of smaller parties, including the Animal Justice Party, that can have outsized roles in how the government operates.  The majority party in Parliament establishes the executive branch and appoints the Prime Minister (their President is appointed, not elected). By forming coalitions, smaller parties can be key in forming a ruling majority which is all important in Australia, since it directs two of the three branches of government.

The Animal Justice Party makes animal protection its central tenet. Ending the slaughter of millions of wild kangaroos for products like soccer shoes is a top priority. But don’t call the AJP a single-issue party. “Actually,” says Katrina Love, the AJP’s national vice president, “we’re the least single-issue party because we take into consideration all issues that affect all animals, including humans.”

Since Mark Pearson’s election, two other Animal Justice Party candidates have won races for Parliament: Andy Meddic in Victoria and Emma Hurst in New South Wales. It isn’t yet the ruling party, but the arc of history is long and it bends toward the Animal Justice Party. Read more about the AJP and Mark. 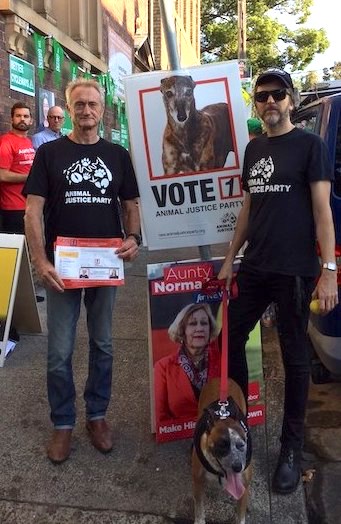 A Member of Parliament reveals Nike’s underhanded dealings Down Under

By Mark Pearson, Member of Parliament​

Nike promotes itself as a responsible corporate citizen, setting out the ethical conditions under which it will use animal derivatives for its products. Nike’s policies specify that any wild animals killed for their shoe leathers must be sourced from ‘actively managed’ populations with government agency oversight. The slaughter process must use ‘humane animal treatment’ and the wild animal must not be ‘exotic or protected,’ with prohibitions on animals such as crocodiles, ostriches and elephants.  It is not unreasonable for customers to read this and believe the shoes they buy from Nike are ethically produced.

Nothing could be further from the truth when it comes to sourcing skins for Nike’s kangaroo leather shoes.

How do I know that Nike’s claims regarding the kangaroo skins used in its products are misleading? I am a proud Australian who has been campaigning for more than 20 years to stop the Australian government-sanctioned mass slaughter of kangaroos, our most iconic animal and the internationally recognized symbol of our Qantas airline. I have seen the aftermath of a kangaroo hunt, viewed the mangled corpses left to rot, and have interviewed shooters and wildlife carers who have also witnessed the carnage firsthand. 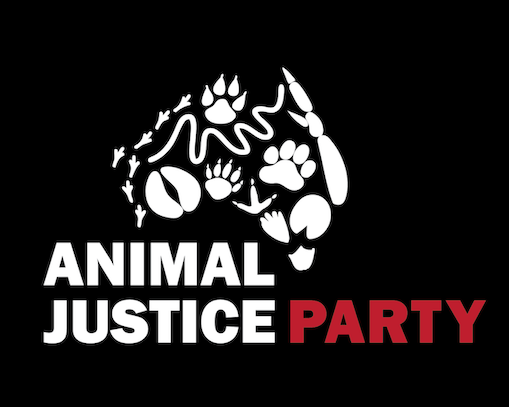 As a founding member of the Animal Justice Party (AJP) in my home state of New South Wales, I successfully campaigned on the party’s animal protection platform and won our first seat as a member (MP) in the state parliament at the 2015 election.  Recently, voters elected a second AJP state representative from NSW, Emma Hurst, as well as another MP, Andy Meddick. We are united in opposition to the commercial exploitation of kangaroos. I have been working tirelessly to establish an inquiry to investigate the commercial slaughter, addressing my colleagues about the horrors of the industry and demanding answers from government about the true nature of the kill.

The Australian government promotes the image of the kangaroo bounding free in the great outback. This advertising draws in millions of overseas tourists each year.  The reality is starkly different. Due to years of extermination by farmers and a commercial killing industry responsible for millions of deaths each year, you are more likely to see a dead kangaroo left rotting in a paddock than a live one in the wild.

If Nike had engaged in due diligence when researching Australia’s kangaroo industry, they would have quickly withdrawn kangaroo leather shoes from their catalogue. The slaughter of kangaroos does not satisfy Nike’s policies on animal welfare, wild animal management or the use of protected or exotic animals.

Wild animals killed for their shoe leathers must be sourced from ‘actively managed’ populations
There are so many flaws in the program that it cannot be described as ‘actively managed’. Kangaroo populations are an estimate only, based on surveying of less than 5% of the kangaroos’ known range which can vary from lush pastures to arid desert. This survey provides the dodgy ‘evidence’ for the formula that establishes the quota of kangaroos that can be killed.  In reality, numbers are now so perilously low that shooters cannot find enough kangaroos to fill allowable quotas. But neither this situation, nor the impacts of climate change, nor projections of population loss from the worst bushfires in decades plus a decade-long drought has deterred Australian State Government departments from actively supporting the killing.

The slaughter process must use ‘humane animal treatment’
Officials point to a mandatory Code of Practice (herein the Code) for shooters as ensuring a quick death for their kangaroo victims.  Reader, you be the judge.  Even if shooters claimed that every single kangaroo was killed according to the code-mandated lethal shot to the head, we have no ability to confirm this because the head is always removed and discarded in the field. A former kangaroo shooter speaks of jaws being blown off, necks ripped open, eyes shot through before the final kill shot. There would be much greater evidence to assess compliance with the Code if heads were retained on carcasses, rather than the blind faith with which the Australian government accepts that there is actually compliance in the field. 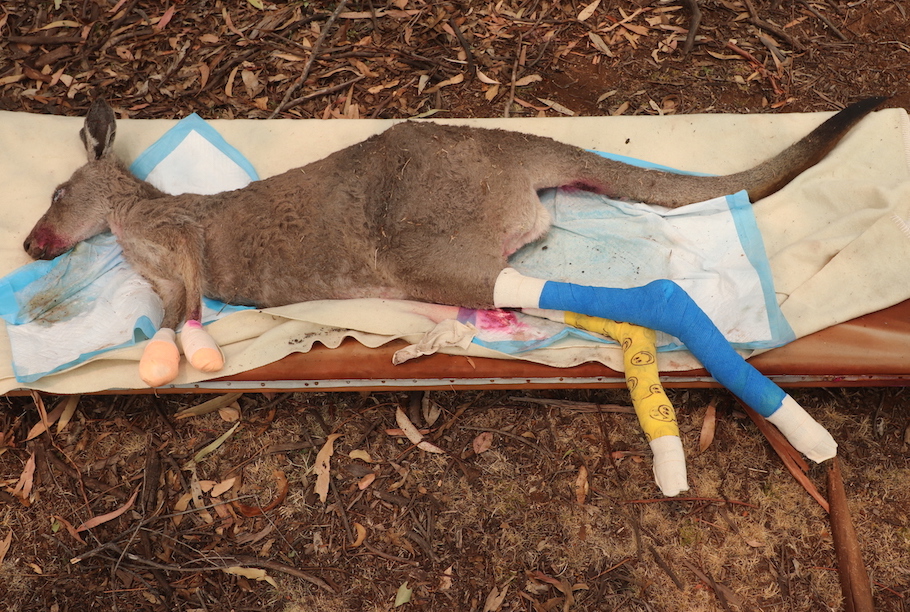 Furthermore, consider the guidance provided by the Code when it comes to orphaned joeys (infants dependent on the now-dead mother).  To kill the joey, “apply a single forceful blow to the base of the skull sufficient to destroy the functional capacity of the brain or stunning, immediately followed by decapitation by rapidly severing the head from the body with a sharp blade.”

As kangaroo killing occurs at night in rural and remote areas there is no oversight at the point of kill and lack of enforcement of the Code. This results in minimal detection of Code violations and subsequent lack of penalization for breaches to the Code. Consequently, there is no impetus for shooters to follow the Code. In the absence of greater enforcement, the Code fails in its remit to achieve the minimum standard of welfare for adult kangaroos targeted by the industry and their dependent young.

The wild animal must not be ‘exotic or protected’ with prohibitions on animals such as crocodiles, ostriches and elephants
Kangaroos are a protected species in all states and territories in Australia. It is illegal to kill, buy, sell or possess kangaroos without a fauna dealer license. This is the same for the Australian crocodile that Nike prohibits exploitation of under its ‘protected and exotic animal’ rule. If an Australian crocodile is considered ‘exotic,’ then why not a kangaroo? Surely the kangaroo is the most famous ‘exotic’ animal in the world, known for its unique two-legged bounding hops, male boxing stance and the joey pouch for the young.

Nike has so many alternatives available for its shoe leather. It does not need this smear on its corporate reputation. I implore Nike to help us save our most iconic animal and stop being an accessory to this despicable slaughter.

Nike, it’s time to wash the blood off your shoes.